As the first pictures started to appear on my Facebook page,  I was reluctant to admit that my eyes had begun to water. Pictures from my homeplace, the first snow of the season. White glistening powder on the sides of the roadway, it is only October, and there is snow. 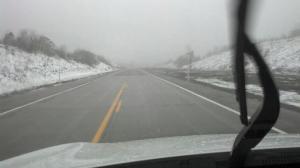 For the many friends and family that live in West Virginia and Southeastern parts of Kentucky, it means a much too early winter, treacherous road conditions, impassable mountain roads, and a chilling, damp cold that cuts to the bone. Yes, absence does make the heart grow fonder. While they are dreading the end of warm days, I am envying their snowy forecast.

Winter for us was all about the fun stuff.

I can remember playing in the snow, well, as far back as I can remember. I took it for granted that there would always be a hill to slide down, a snowman or an igloo to build. You could always find someone out and about playing in the snow. You always had a partner for a snowball fight, which was great until the temperatures dropped enough to make the snow into “ice” .. I still remember the sting of being hammered with a few of those. Mostly, we played in our yards with our cousins, friends and family members. Our playground expanded to more than just our yard. We roamed the bottom we lived in and enjoyed as much of the snow as we could. I remember how excited we were to check out everyone else’s snow creations! 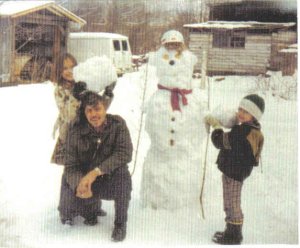 I notice a lot of things now in  this picture. First of all, the snowman. He has ears?  He is donning a blonde wig? and wearing a Coal Miner’s safety hat? Okay, so he’s a little different.  Honestly, he looks more like a bear! What happened to “twig” arms? This dude is toting two tree limbs? Maybe he is planning to ski? or two switches for later use! If you know my momma’s brother, Uncle James? well, it just explains that crazy snowman, and especially us posing with huge snowballs to throw at him. He knew how to have fun. Everything about this photo says FUN! He never really showed us mercy in the snowball fights, why should he? He was in self-defense mode.  It was on! Yes, he did “let” us throw the big ones at him. I’m sure we most likely missed! It snowed so much that particular year, we were able to make an igloo that lasted for more than a week. My brother and I would take a snack and go “sit” in the igloo! at least until the seat of our pants were wet and cold again.

My mind started to wander back to so many of the great snows we enjoyed as children. I remember the anxiety when it snowed on a sunday night, hoping it would be enough to cancel school-incidentally, that required more back then than just a few inches! If we did go to school, that meant an experience all its own trying to get the school bus to make it to the top of the school hill.. This sometimes took a “hang on, we’ll try one more time” and then if unsuccessful, we’d have to walk! Mom and Dad would remind us  nightly to “leave the water dripping” so our pipes wouldn’t be frozen. My brother would have to get in extra coal to keep the fire going in case the electricity went off.  He probably has some not so good memories about these parts of winter! It was great to be a girl, until you had to heat dishwater to wash the supper dishes.

We would walk to our friends’ houses in the snow at night. I can still picture the clear sky full of stars, and a huge moon lighting the way,  so bright that it looked like every inch of snow had jewels embedded. We would make the journey to join practically  the entire neighborhood for a bonfire of tires, and whatever else we could find to burn, and then we would sleigh ride. We rode inner tubes, old tires. I don’t recall ever seeing a “real” sled? We could always depend on someone to bring a huge, yellow “mining curtain” that we would all pile on. It always ended up in a massive train wreck at the bottom..but back up the mountainside we’d go. It seemed like it took forever to get back up on that hill, for an 8 second ride that you hope didn’t land you in the unfrozen parts of the creek!

We would stay until our feet had gotten wet (I don’t remember owning snowboots or gloves) and no one else had anything left to burn to keep some lights going. I hated the sock gloves, because your snowball would stick to them, a waste of patting and molding it! I thought about how carefully we would adorn the sock, then the Betsy Ross bread bag, secured with black electrical mining tape, then the other sock and finally, the now tight-fitting shoe. The longer your feet stayed dry, the longer you could stay away from home. Keep in mind if you had wet feet? you still had the long, cold trek back home which was absolutely miserable! We would drag in wet and cold, only to have Momma’s hot chocolate on the stove waiting to warm us up. She always seemed to know when we were about ready to come home. She didn’t care about playing in the snow, but she made sure we were able to enjoy as much of it as we wanted. “No yellow snow”  or “Get the snow from up high”  I can still appreciate her words of wisdom for our delicious batch of snow cream!

After we would get a change of clothes, Dad would always say he was going to go and “check the roads” and my brother and I would always ask if we could go? He always said yes, and unlike my Momma, we knew exactly what he meant by “checking the roads” .. that meant testing the road to see if it was slick! Spinning out, donuts, whatever you want to call them? round and round in the store parking lot ..that’s how we checked the roads! I know his ears were sore from us screaming every time we spun around. Okay, so maybe I was the only screamer, but I think Dad enjoyed it even more than we did.

Yes, I miss it. I think I will always miss the great snows. I will always miss “Home” but I will always have great memories because of the people I was surrounded by. Maybe this year, we will have our little piece of home around here. Until then, I’ll just enjoy the memories, Momma’s hot chocolate, cheese popcorn, and all the snow pictures I can look at.