Coming from divorced parents, things are always different. Separated. Distanced. Disconnected. No matter how much parents try to keep the gap from developing, it usually happens. I had a relationship with my Daddy. I saw him more than most divorced kids had the opportunity. My mother and her sister married brothers. Our lives were forever intertwined. It helped that I had an understanding stepdad. He never denied us that opportunity, I was always thankful for that.

At the age of eight, I knew that my parents were not reconciling. I had known it for a very long time. I also knew that he had moved on as much as an eight year old could understand. The apparent evidence was not in what he told me..but what he showed me.

A white bassinett, a small bundle, wrapped in blankets. I remember it very well. I played with my cousins the entire day, but was always aware of the baby boy sleeping amongst the noise we created. I knew who he was. I knew he belonged to my Daddy. For an eight year old, I understood only that and happily resumed my much cherished time with my cousins. It would be the last time I would see the baby boy, but far from the last time I would think about him. You can’t be lost… when someone knows you exist.

My Daddy, at the young age of 3o, passed away when I was only ten years old, and my younger brother was only six. A tragic automobile accident that would widen the gap for an eternity. The comfort of knowing he was always there when I visited, was now severed. It was a huge loss for me, the life changing kind. 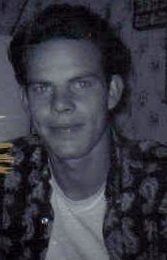 Years would pass, developing our family reunion during the Memorial Weekend Holiday.  I could always count on my Grandpa Kelly to ask me the same question year after year. He would ask me, “Have you found your brother yet?” It was a haunting question, because he knew that I had started looking ten years later after my Daddy had died. This time, I was 20 years old. My answer was always the same, a quiet “no” I haven’t had any luck. The only thing I really ever knew was his mothers’ name, and the fact that he lived in Maryland. It was not much to go on, but it was all I had. I would love to say that everyone encouraged me to look, however, it was not the case. It’s a little scary looking for someone you know nothing about. What if he was not a nice person? What if he was dangerous? But my answer was, “What if he is the opposite?” So I held onto my optimism.

I started my search with the vital records department. I had his birth certificate mailed to my address. It was a start. I ended up filing a “missing persons” report with a service through the Salvation Army. The letter was returned, with an “apology” that the search was uneventful. Although I hadn’t forgotten about him, it would be my last attempt in closing the gap. Dead end.

In the meantime, other family members would pass on, links to Johnny and his whereabouts – My grandpa, my Daddy’s last living brother. The gap seemed to only get wider and the hope of finding Johnny was even more hopeless – or so I had thought.

Fast forward to the year 2004. It had been 15 years since my search had ended. I received a phone call from my Aunt saying that I was getting ready to get a phone call from someone I wanted to talk to? Who? I will never forget her words, “He found us” I don’t know the whole story, but her words echoed.

I hung up the phone and waited. Amazing how many thoughts can swirl through your mind in 15 minutes. I was extremely nervous. I could hardly explain to my husband what the phone call was about. It was a long wait… He was almost 30 years old now. What if he was disappointed in what he found? How can you make a good first impression over the phone? What kind of questions would he have. Would I have the answers he was looking for? It was a whirlwind of emotions. What would he look like? Like me? Like my younger brother? So many questions I wanted to ask him, but I didn’t want to overwhelm him. I can only imagine how difficult it was on his part.

I can’t tell you what we discussed that day. I really can’t remember the details. Only that it was awkward for us both. There were 30 years of the unknown hovering in the air between us. It was the start for us both to closing the gap.

He was able to meet the family that lived in Kentucky first. They gave him an awesome homecoming. Next, would be my turn for us to meet.

This would be the most emotional weekend I would ever experience. It is hard to put into words, without sounding just plain “weird” but that’s the only description I could use.

How do you meet your brother for the first (technically) time? How much is too much information? Keeping in mind that he was only three when Daddy died. Both of my brothers have next to zero memories of him. It would be a huge responsibility for me to close these gaps. I only hoped that I could offer something he could hold onto. Something that could come from my memories of who my Daddy was, what kind of person he was. What if I couldn’t convey that. What if I failed in attempting to closing the gap? The day came, I would meet Johnny for the first time.

As far as physical appearance? The first thing I notice is that he was extremely tall! Six- foot seven, compared to my five-foot three? He was a giant. He was very polite, and well-mannered, not that I didn’t know this from our phone conversations. The hardest thing about our first visit? He looked so much like my Daddy, but more than I had expected him to. I had the overwhelming feeling that I was staring at his ghost- present in front of me. My Daddy’s dimple was the first thing I noticed..since my daughter has it also. Both of my brothers look like him. I am thankful for this. It keeps his memory well for me. I only wish they were able to have my memories also.

When the weekend was over, I think it took me a few days for it all to sink in. I was on an emotional rollercoaster. If he only knew how much it was like having a part of my Daddy back in my life. It was not only appearance, but actions and parts of his personality that were parallel. How do you explain that to someone who has few memories. I hope I relayed that in a healing sort of way.

We have had other visits since then, and Johnny has since married and I have a beautiful niece (who happens to have inherited her grandfathers dimple!)  We have continued to have a relationship as brother and sister. I like to think of me and my brothers’ as being the best parts of our Daddy. I am blessed with two awesome brothers. They are my heart, I hope they know this. We continue our efforts in closing the gap, visiting when we can.

A couple of years ago, I had a wish come true….. I had both of my brothers here at the same time. All three of us. They have no idea what this meant to me. For that particular day.. the gap was closed. Daddy’s circle was complete for once. The best parts of him in one place. They never noticed how I would find myself staring at them both. My heart was full – because I could sense that my Daddy smiling at the three of us. No longer lost, but finding each other. I know it was a great moment for him also. 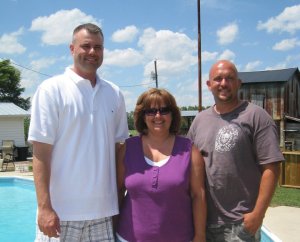 7 thoughts on “Closing the Gap”