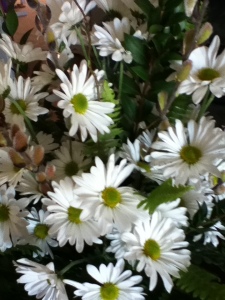 March always seems to creep up on me. I’m almost to the end of the month, and I still get that lost feeling. I then realize that it seems to be a pattern each year. Counting the years since my Momma has been gone. We are almost at year seven, and some days it seems like she was just here yesterday…and others seem like she has been gone so much longer.  Regardless, I feel the void…and I attempt to surround myself with her memories.

I have a newfound fascination with these flowers that began almost seven years ago. One of the many memories she left for me. I felt compelled to share the daisy story since it has been a comfort throughout my grieving process. (did I mention that grief is a process, it has no time limit?)

It is amazing how being in a hospice center can change your outlook, for the patient and also for the family. It is a transition from living to dying, which is an entire blog subject on its own. I wouldn’t have traded anything for the amazing people who cared for our family. On occasion, different groups come to the center for visits. Sometimes they were children’s choirs, youth groups with a special song to share, or just some of the  many wonderful hospice volunteers.  This particular visit was from a musical group of youth, ministering in song.

My mother enjoyed the many groups that came around, especially the music. She was well ready for some rest after having a busy afternoon. She drifted in and out the remainder of the afternoon, but felt she had to share her story of where she had been. She began to tell me how she was in a large field with more flowers than she could count. She told how they were fragrant and plentiful and how they almost seemed to smile. “What kind of flowers? What color?” I had asked her.

She continued on to tell me that the petals were white.. and the centers were yellow. The only thing is? She said that the centers were more like golden crowns that glistened in the sun. She said she was engulfed in them, fanning her hands through the petals. I asked her if she thought they were Daisies? “Yes, that is exactly what they were” she said. She also said how wonderfully peaceful it was there and how she looked to her right and saw her sister who had passed away just one month prior. She was gathering flowers in a basket she was carrying. They waved at one another before she left the field of flowers.

I can tell you that I loved this story….but then the day came when I actually “cherished” the glimpse and it brought on a whole new meaning.

Approximately two years later.. I stumbled upon a book someone had suggested was a good read. Hinds Feet on High Places by Hannah Hurnard. I can show you the tear-stained pages where I “cherished” the words that were written my confirmation and comfort that my Momma was indeed sharing something precious.

(excerpt from Hinds’ Feet in High Places by Hannah Hurnard)

All around her, in every direction, were the snowy peaks of the High Places.  She could see that the bases of all these mountains were extremely precipitous and that the higher up they were all clothed with forests, then the green slopes of the higher alps and then the snow. Wherever she looked, the slopes at that season were covered with pure white flowers through whose half-transparent petals the sun shone, turning them into bright whiteness.  In the heart of each flower was a crown of pure gold.  These white-robed hosts scented the slopes of the High Places with a perfume sweeter than any she had ever breathed before. All had their faces and golden crowns turned down the mountains as if looking at the valleys, multitudes upon multitudes of them, which no man could number. Wherever the King and his companion walked, these white-robed flowers bowed beneath their feet and rose again, buoyant and unsullied, but exuding a perfume richer and sweeter than before.

I can tell you in all honesty, She never read this book.

I continue to gaze at daisies in amazement, and I have some “daisy” mementos that I keep close.  They are such special flowers for me.

Yes, it is that time of the year again. I will be pre-occupied somewhat, my grieving process continues and I will have some sad moments…but I will look forward to cherishing the daisies in the upcoming months ahead.

Thank you Momma for the comfort of Daisies. 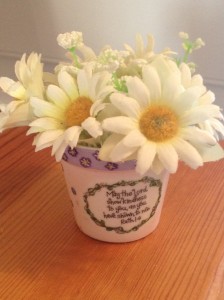